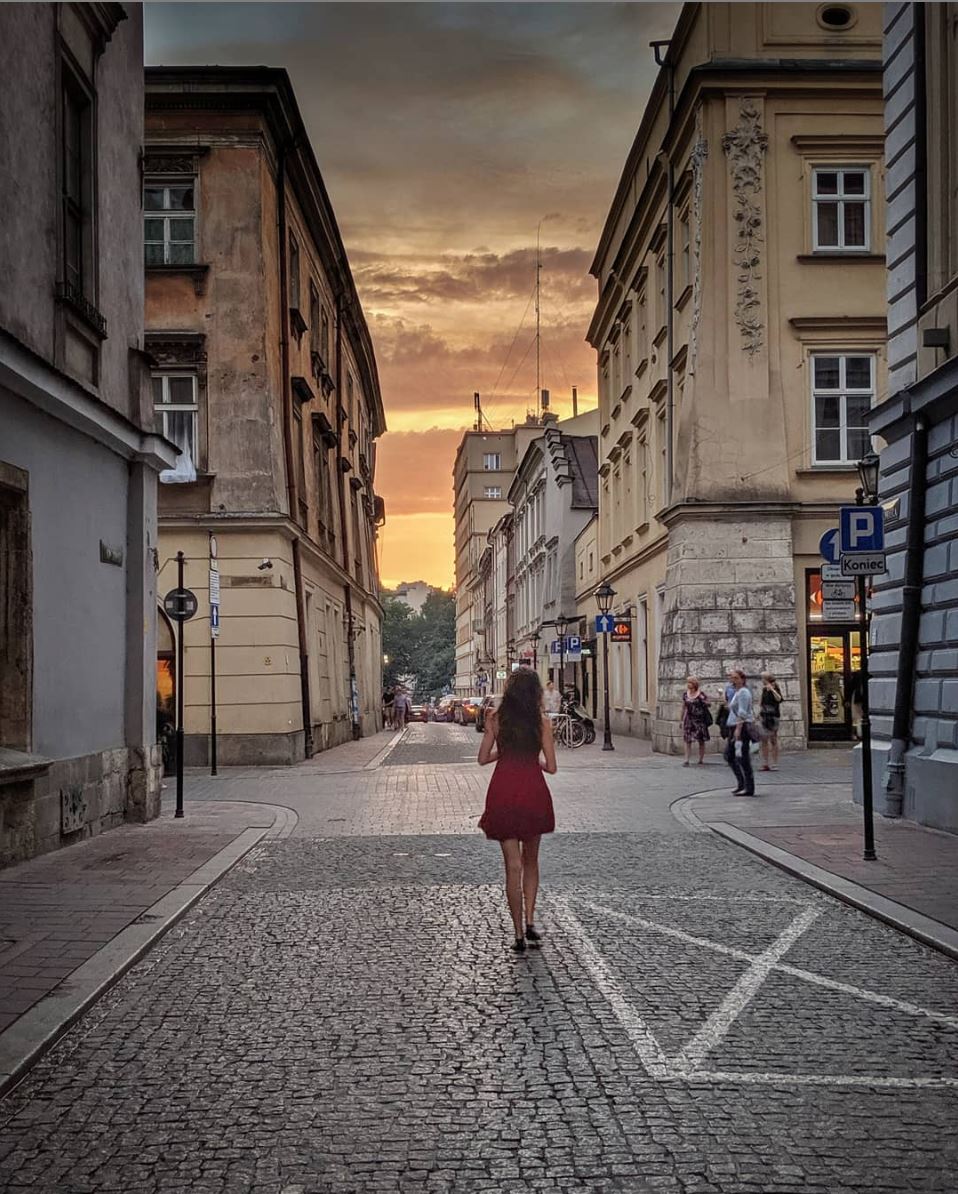 We set aside 10 days to spend in Krakow, figuring this would give us time to visit Auschwitz, try and digest it, and explore this city that neither of us had visited previously.  Little did we know that needles and the sun would somewhat dictate our schedule. Read on for an explanation 🙂

If we were to be put in charge of marketing for the city of Krakow, we already have the slogan picked out:

Krakow. It will surprise you.

Because that is how we felt about our time in Krakow. We were surprised by something new every day we were there.  The kind of “new” that explodes from unexpected experiences or sneaks up on you when you turn a corner and find something else to appreciate.

Krakow dates back to a hilltop fort built in the 4th century on what is now called Wawel hill.  Coincidentally that is where Wawel Castle now stands and where to this day you can still find dragon bones and one of the earth chakra points.  Who knew that Krakow had it all?

NOTE: “w” is pronounced “v” in Polish.  So “Wawel Castle” would be said “Vavel Castle”.

Oh. And they have dragon bones. More on that later.

Krakow was originally chosen because it was the closest major city to Auschwitz.  Obviously this was not meant to be a fun stop per say, but a meaningful one. As George Santayana wrote in 1905

“Those who cannot remember the past are condemned to repeat it.”

Visiting a place like Auschwitz / Auschwitz II-Birkenau to learn and remember what the ramifications of not standing up against evil, of staying silent when we see wrongs being perpetrated, when we focus on what makes us different, of unchecked nationalism…these are the lessons from a place like Auschwitz.  This was not a selfie-taking fun day, it was a day of remembrance, terrible facts, and strange dichotomies.

We have intentionally not posted much about our trip there because frankly, we’re still unsure how to express and share it all.

So, we came to Krakow because of what it was near, geographically.  We would return to Krakow for all of the wonderful surprises it had in store.

One tool we use when we are visiting a new foreign city for the first time is to sign up for one of those walking tours within the first 48 hours of being there.  We normally do a free walking tour (tip them!) or a paid tour, but either way the point is always the same — by going on a walking tour with a knowledgeable guide early in our visit, we get a sense of the “lay of the land.”  We get some history of the city we are visiting, some ideas of the main tourist sights, ideas for food and drinks, and without fail we have *always* gotten great ideas of places, activities, or foods that we wouldn’t have come across as readily if not for local insight from a guide.  So our first full day in Krakow, we went on a 3 hour walking tour.

After that, it was all needles and sunshine.

Needles that dictated our time.

When we started our trip, Nick already had a full sleeve (of tattoos!) on his right arm.  He added additional tattoo pieces in both Paris and Norway to that sleeve, but had a specific idea of what he wanted done for his next sleeve.  Because it was going to form the basis for his next sleeve, it was important that the right artist was found – and Krakow provided!

The idea was to combine his favorite flowers with the chemical structures that he had strong opinions about with just a dash of color thrown in as an accent.  Peonies, hellebores, dahlias, and orchids made up the primary base of flowers, while Cortisol, Dopamine, Serotonin, and Endorphins rounded out the chemical structures.  Prior to this new sleeve, Nick only had black / gray scale tattoos, where as this new sleeve would incorporate some color. After discussing the project with several artists and working on the design, it was decided that only a half sleeve starting at the shoulder could be accomplished in the time we had allotted.  Over the course of three days Nick spent 8 – 9 hours sitting in odd angles getting his favorite flowers and the basis for the chemical design tattooed. Elizabeth used this time to write postcards, finish yet another book, and do some solo exploring. The results are loved, but it did take three days out of our Krakow time.

Which turned out to be quite alright because it was HOT for most of the time. Not just “oh, Nick always runs warm” – this kind of hot had Elizabeth laying on the sofa with the fan directly on her as well.  You know it’s really that hot when even Elizabeth thinks so! The heat settled in within a day or two of our arrival and made walking miserable; hell, moving from the bedroom to the living room was sweat inducing.

Great news though! It will not be this hot in India!  The forecast from 5am to 9pm while we are there is “111 degrees with Blowing Dust.” So if we thought Krakow was bad….

Anyway! Because of this incredible heat and Nick’s tattoo schedule we scheduled our touristy activities to occur early in the morning or in the evening.  Which turned out pretty well, since we had most of the places we visited to ourselves or at least it was much quieter while we were there. The tourist sights were beautiful, and yes, they were a part of the “surprise” that Krakow had to offer. Wawel Castle, Krakus Mound, Wieliczka Salt Mine, Kazimierz neighborhood and of course the Main Square.  The nuance in (most) of these places is what surprised us and made them so much fun.

The Main Square, in what is known as the Stare Miasto, is one of the largest medieval town squares in Europe at 9.4 acres!  It is surrounded by cafes, restaurants, milk bars, more ice cream parlors than you can count, roaming buskers, and random statuary and sculptures.  The square has a beautiful Cloth Hall rebuilt in 1555 in the Renaissance style, the 10th century Church of St. Adalbert, and a trumpeter that plays a version of taps EVERY hour, on the hour, every day. No hours off, no days off, never. The trumpeters are firefighters first and trumpeters second. The trumpeter ends his tune abruptly, supposedly because a predecessor was shot in the throat.  That’s one way to start a trend?

The Kazimierz neighborhood, dating from the 13th century, is the historic Jewish quarter in Krakow. One of the most famous Kings of Poland, Casimir III, the last king of the Piast dynasty specifically invited Jewish people to come and settle in the neighborhood he had created (and named after himself). In this place they would pay no taxes, would have the freedom of worship, and would be defended by the king himself; this was much akin to states offering incentives to bring big corporations within their borders in the US these days.

We found that Kazimierz was the one neighborhood that we could not visit without finding at least 3 or 4 restaurants that we would have to try – but there was never enough time! Kazimierz was a constant tease; it was lively with pedestrians, teaming with restaurants of all kinds, coffee shops, and street vendors.  We went back on multiple occasions just to stroll and always were sucked in to little hole in the wall restaurants where there was no English on the menu, very limited Enligsh from staff, but some of the most solid Polish we had anywhere.

Kazimierz is just a short walk across the river from the Old Town area, crossing beautiful span bridges.  The main crossing has sculptures perched precariously on wires that balance in the wind.

Other points of surprise:

Krakow is a place we will certainly come back to visit again soon!

Well, there is a legend that when Krakow was first starting up there was a dragon living in a cave under Wawel Castle, doing the things dragons do apparently – eating virgins, killing sheep, etc. Long story short, the dragon was killed and his bones were hung outside of Wawel Cathedral, the main church of Wawel Castle.

Needless to say, Krakow was one of our favorite cities so far and one that we will most certainly recommend to others and plan to come back to visit!!

Now onto Italy, HAWAII, and Italy…