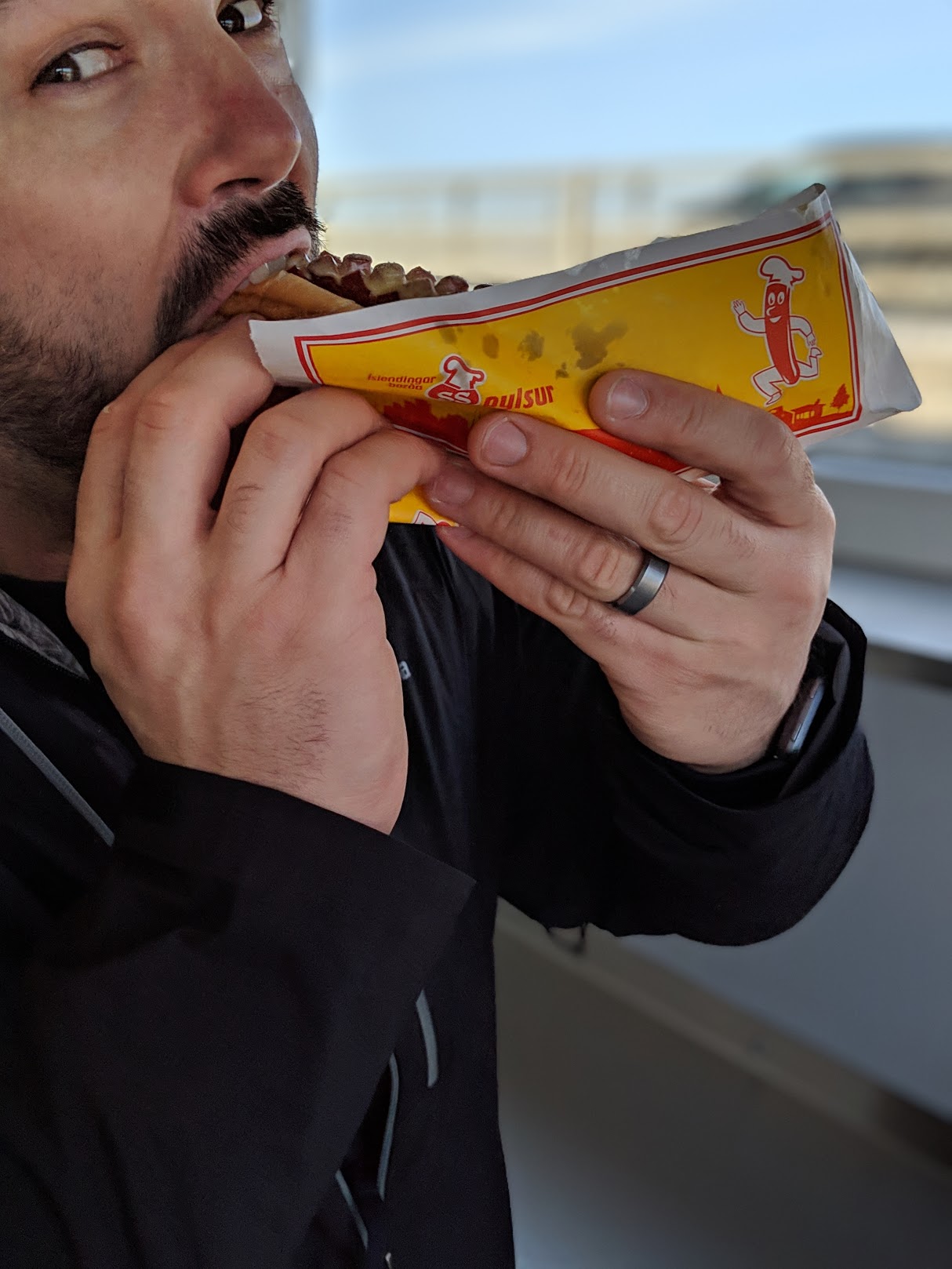 My (previously) preferred hot dog is a roughly 6 inch dog, boiled, on that classic hot dog bun with a line of ketchup and melted American cheese. Like this, except melted:

There, I said it. It is one of my five guilty pleasures when it comes to food.  Full disclosure:

Just like the other items on the above list, I partake in those pleasures very rarely (except the coffee creamer) because I’d rather be alive long enough to enjoy them for decades to come instead of succumbing to them all in one sitting and an early demise.

However, when I found out that hot dogs were kind of a “thing” in Iceland, that Icelanders love their hot dogs, and that you can supposedly find them in any town that has more than 1 road, needless to say I felt a moral and cultural obligation to try as many hot dogs as possible.

For culture! For science!

What Elizabeth and I found out is that there is a REASON that Icelanders eat so many hot dogs – because they are GOOOOooooood.  Does that seem dramatic or superlative? Once you have had one (or, ya know, 8 or 10), come back and let me know if you think I was being superlative.

There are, I think, four distinct components of the Icelandic hot dog that make them so. Damn. Good.  In no discernible order as they are all equally important and tasty, they are the:

The most common type of hot dog in Iceland is SS Pylsur.  They are longer and perhaps a tad more slender than American hot dogs and with good reason. The length of the resulting dog allows the hot dog purveyors to put more toppings on the dog’s – and that is where the magic happens.

The traditional Icelandic hotdog will have a bed of crunchy fried onions, with a single line squirt of ketchup and mayo.  After putting the dog ontop they add a squigly line of what is considered mustard on top.

The bun. Ah that toasty, lightly crunchy on the outside pillowy soft on the inside, transporter of hot dog goodness!  Out of all of the hot dogs we tried, this was probably the only ingredient that stood out as a differentiator in how they were served that really made a huge difference.  Fine, if you JUST want fried onions and ketchup? Ok, fine! But this bun, how it SHOULD be prepared, is vital. Without it, it’s just… well, still better than most American hot dogs, but it’s transformative.

Why then, you ask, is the bun so special. Before they dress and serve the dog, the bun is toasted in something akin to a panini press.  Simple you say? I agree! But what a difference it makes. The bun is laid flat on the press, so both the full exterior and the full interior of the bun are toasted.  Once you bite into the bun however, the interior retains enough of its soft pillowy expected hotdog bun consistency to keep the entire meal familiar yet truly, truly *better*.

The fried onions, upon which the dog lies before moving to your mouth and your heart, provide yet another type of crunch.  While the toasted bun is a crunch that begins and ends when your teeth bite into it, the fried onions give you that satisfying consistent crackly-style-crunch that pairs so well with the slight hint of onions and oil.  It’s hard to describe these fried onions except if you took a perfectly fried onion ring (not the beer battered sort, but the fast food restaurant type), coarsely ground up the entirety of it – onion, breading, and all – so it was roughly the size of a coriander seed and fried the resulting mix.

I want to talk about the mustard in Iceland for a second.  It is hard to describe. It’s basically honey mustard, but forget what you know about American honey mustard. This is a bit thicker in viscosity, sweet but not sugary, darker in color, and with more of a tang and pop like yellow or spicy mustard would have. It really is pure comfort food flavoring.

We tried hot dogs at hot dog stands. We had them at gas stations, and road side convenience stores and random restaurants along the way.  They were ALL good, though some better than others.

Below I’ve made an easy guide to help you decide whether or not you should partake in a Pylsur (aka great Icelandic Hotdog) while visiting, as well as some pro tips for finding and ordering!

When trying to decide whether or not to have a hot dog:

Reflections at The halfway Point: Most Intense Activities…